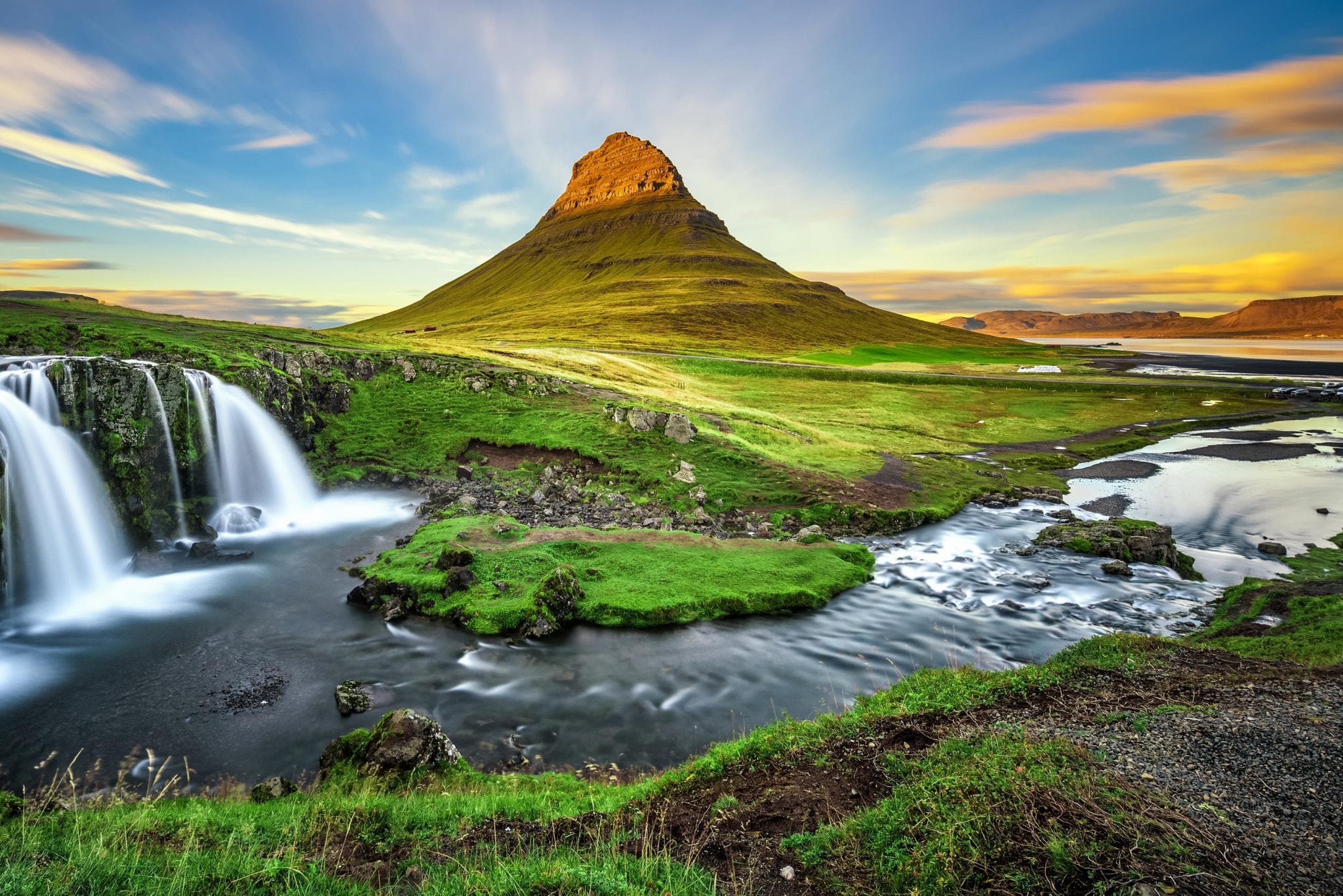 Snæfellsnes is in the West of Iceland and about 160km from Reykjavik. It is another destination that has very interesting stories about elves and other folktales that you’ll enjoy hearing as much as you’ll enjoy watching the sight itself. Snæfellsnes National Park is surrounded by glaciers and volcanoes to the shore. The tourist spots of the Snæfellsnes Peninsula are all in the proximity of the National Park. Even the cliffs and seaside between hamlet Hellnar and Arnarstapi are a part of the National Park. The most famous tourist attraction is the Snæfellsjökull glacier.

One of the main attractions of the Snæfellsnes Peninsula is the Snæfellsjökull glacier. It is a dormant strato-volcano capped with a glacier that erupted 1800 years ago. The glacier is at the far east end of the National park in Snæfellsnes, 1446m high, and 200m deep. It is believed that it is one of the seven energy centers of the world, the chakras. Visitors say that the magnetic energies of the glaciers give them a hard time sleeping the night after coming back from here. Fun fact: Parts of the film, Journey to the Centre of the Earth, were filmed here, and Anita Briem, the female co-star, is Icelandic too.

Just at the boundary of Snæfellsnes peninsula is the Eldborg scoria crater. It is 100 meters above sea level and rises about 60 meters high. Elborg means Fortress of Fire, and it is believed to have been active some 6000 years ago. From the top, you will be able to see 5 more carters, just as perfectly symmetrical as Elborg. These crates are a nest to the ravens. One of the music halls of the Harpa concert hall is named after the carter.

The hike to the volcanic crater top starts from the Snorrastaðir farm and it is about 5km from here. It takes about 1.5 hours to 2 hours to reach the top. The hike is fairly easy except for the last 60m before the top of the carter. To assist the visitors in the hike chains have been fitted.

The Snæfellsnes peninsula lava systems stretch over 30 km and entail over 20 lava fields, some with ragged blocks and some with smoother ropy. Mælifell is in the East and Öndverðarnes in the West. Berserker is one of the famous lava fields that was erected about 3000 years ago from the lava flow of Raudkula, Grakula and Korhraunskula volcanoes. Today the basalt form is with moss and gives out hues for green, red and orange. The Búðahraun lava field is at the south of the Snæfellsnes peninsula. It stands right on the sea bed, and it’s roots are soaked in the water. With over 130 plant species, the hollows within the lava field harvest the most extraordinary vegetation in the country. The triple-flecked rocks have an accent of green, olive, and white. Hallnahraun is in the North of the peninsula, and the carter is now under the glacier. The low land of the National park is mostly the lava that flows out from the Snæfellsjökull glacier.

Another beautiful place to visit in the Snæfellsnes peninsula is the Djúpalónssandur, the Black Lava Pearl Beach. The beach is accessible through the Nautastígur – the path of the Bull. It takes you through lava fields, and the path opens up to the Black Lava Pearl Beach. One of the rock formations in the path has a hole through it and gives the view of the Snæfellsjökull glacier when you peep through it. The pebbles on the beach are so soft and shining black as if they’re polished. Hence, they are called pearls. The Beach has rusty iron pieces lying on the sand. These are from the ship that got wrecked on 13 March 1984, from a cold blizzard, and fourteen fishermen were lost. The ocean waves washed up the irons pieces, they’re kept in the memory of the fishermen who were never found.

Not far on the Djúpalónssandur Black Beach, is a beautiful cliff Lóndrangar cliff with two volcanic plugs. These are said to be the church and library of the elves. There is a huge distinctive reddish lava rock called the Söngklettur – the Singing Rock. Locals say that someone once heard Elves singing.  It is a common belief amongst the Icelanders the elves must be asked before visiting their habitat. And as a sign of respect, no one should climb on their habitat or mow the grass. As over half of the population believes they exist, it is instilled in their culture to respect elves, and Icelanders learn it while growing up. It’s also said that bad things happen to those who do not respect the elves.

There are plenty of fishing towns near the northern shore. These include Arnarstapi, Grundarfjörður, Hellnar, Ólafsvík, Rif, and Stykkishólmur. Amongst these, Grundarfjörður is the most famous. It is located on the north of the Snæfellsnes peninsula and near the magnificent mountain Kirkjufell. The town is surrounded by mountain ranges. Another fishing town is the Ólafsvík. Not far from the village is a 50m high waterfall called Bæjarfoss. Hellnar was also a fish village that dates back to 1560. Every building structure, farm, lodges were related to fishing. Now Hellnar has cafes and hotels and everything else by the sea for tourist attractions. A wide range of outdoor activities, ethereal birdlife, serene hiking trails, see whales swimming in the ocean at all of these fish villages. If you want to experience the wonders of Snæfellsnes, check out some of our private luxury tours where you can see them up close.