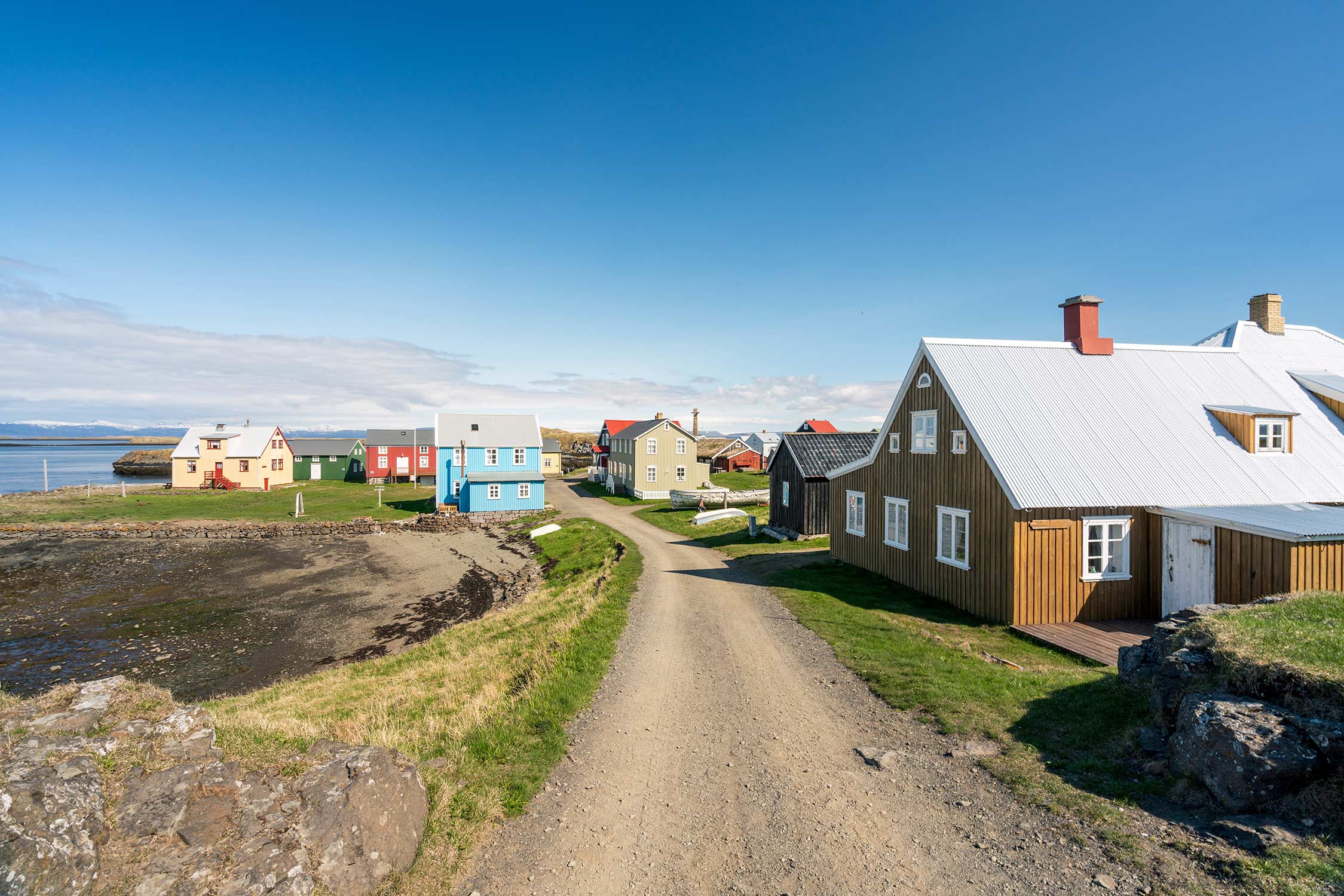 Flatey is a little island on Breiðafjörður Bay. Ferries sail between Stykkishólmur and the Flatey islands, Patreksfjordur and Breiðafjörður throughout the day. The Flatey island is known for its 100 year old houses, painted in cheerful colors, that they almost feel like a movie set. The island is eerily beautiful and deserted from modern life, making it a perfect getaway from the hustle-bustle of normal life and a perfect opportunity to contemplate your thoughts.

The houses in Flatey were built at least 100 years ago, and they are preserved so well that it takes you to the life of Icelanders a century ago. Flatey is an isolated island, and the only inhabitants here are two Icelander families, a handful of sheep and chickens, and a hotel for tourists. Everyone else is either tourists, nomads or Icelanders who’ve come here to visit the island. Tourists visit the island only during the summertime. In winter, the island gets dark and submerged in the snow and fewer ferry sail in this direction. During summers, a ferry set off to Flatey from Stykkishólmur and Brjánslækur at least twice a day. The narrow path and bright houses of Flatey is the backdrop to many films like The Honour of the House (a short story by Halldór Laxness). Amid pure wilderness, there’s a library. It is the smallest and the oldest library in entire Iceland, which was built back in 1864. The library is right next to the Church, which is also worth a visit. The ceiling just above the altar is painted with the most accurate description of the Flatey’s landscape.

It is the biggest town in the south of Westfjords, and with a population under 700. Patreksfjordur translates to ‘the fjord of St Patrick’. The island was named Patreksfjordur when the entire Iceland converted to Christianity. It is one of the fishing hubs of western Iceland; from fish farming to fish processing, all services are carried out here. Recently, Patreksfjordur gained tourist attraction, as the village is the neighbour to Dynjandi waterfall, Látrabjarg cliffs, and Rauðasandur beach. Dynjandi is a spectacular waterfall pouring from a 100 meters’ height, Látrabjarg cliffs are the best spot for watching countless species of birds including the elusive puffins., and Rauðasandur is a serene beach with the sand in hues of red and golden (unlike many beaches of Iceland).

Breiðafjörður Bay is the second largest fjord in Iceland and it extends roughly 70km. Flatey, which is the biggest Island on Breiðafjörður Bay and the only one that has inhabitants. Hvallátur, Svefneyjar, and Akureyjar are some of the known islands besides Flatey. They all have one thing in common, these islands were formed by the glacial force in the ice age, and the landform resembles Westfjord. The islands are densely populated with diverse birdlife including eiderm, puffins and white tailed eagles, shells, and fishes.  If you want to experience the wonders of the small islands around Iceland with a private tour, check out some of our private luxury tours where you can see them up close.