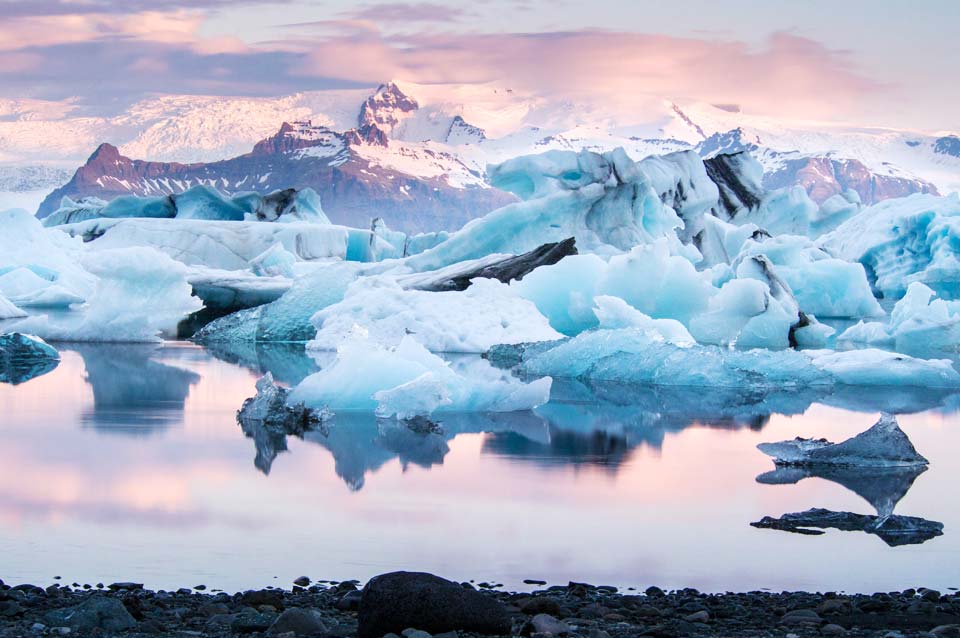 The Glacier Lagoon and Diamond Beach are natural tranquilities that have become destinations of South Iceland due to its stunning beauty. Thousands of tourists are drawn to the South Coast throughout the year because it is the home to Europe’s largest glacier Vatnajökull. The journey to Vatnajökull Glacier offers the ultimate experience of witnessing icebergs floating in the sea from up close at the Diamond Beach and energizing yourself with an adventurous hike in the last glacier of Europe. On our Iceland Private Tours, we take our guests and let them experience the amazing sights at the Glacier Lagoon & Diamond Beach.

The natural tranquility, Glacier Lagoon or Jökulsárlón, sits at the south of Europe’s largest glacier Vatnajökull. The source of this natural lagoon is the ever melting Vatnajökull glacier, and the retreat is a clear demonstration of the impact of global warming. During the summer, tourists witness Seals swimming in the lagoon and relaxing on the floating icebergs, and clouds of birds flying.  It takes about 6 hours to drive there from Reykjavik. That’s why we always break the drive into two days and stay at least one night on the South Coast. During the journey, you will drive past all the scenic sites of the South Coast like Reynisfjara black beach, Skógafoss, Seljalandsfoss, and Eyjafjallajökull volcano.

Vatnajökull is the largest glacier in Europe, and it covers over 8100 km2. The Glacier extends all the way to Þórisvatn highland in the west, and Fljotsdalshreppur in the east. Underneath the ice mass is the two most active volcanoes, Grímsvötn and Bárðarbunga. According to geologists, Grímsvötn has erupted 100 times since humans began living here. The last eruption was in 2011, and luckily it left no damages. The Vatnajökull National park is built over the Jökulsárgljúfur National Park and Skaftafell National Park, making it the second-largest national park in Europe. There are endless entertainment options, ranging from hiking to the glacier, ice caving, and Glacier Grand Slam. Snowmobiling is the newest addition for tourists and it is available only from January to March.The alluring glacier adds the real charm to the South Coast. It is a popular destination among filmmakers. James Bond films A View to a Kill and Die Another Day, and Tomb Raider were both filmed right here at the lagoon, and the movies Batman Begins and Interstellar were shot inside the Vatnajökull national park.

The Diamond Black Beach is near the Glacier Lagoon, and the strip of black sand belongs to Breiðamerkursandur. It’s called the Diamond Beach because the chunks of the glacier, lying on the black sand, resemble diamonds in the gleam of the sun. These icebergs come from the melting of Vatnajökull Glacier. The ice falls into the Glacier lagoon and gets carried away into the sea. The Atlantic Ocean waves carry them to the shore of the beach. Due to global warming and the rapid melting of glaciers, the uniqueness of the site is expected to vanish. The shore is the home to the many seals, and they’re often spotted relaxing on the iceberg tips. From the tourist’s perspective, Diamond beach is safe as the ocean currents are mellow. But they should not try to climb up the icebergs as there are chances of it flipping and trapping the hiker into the sea. If you want to experience the wonders of the Glacier Lagoon & Diamond Beach, check out some of our luxury tours where you can see them up close. We would also be happy to create a personalized private tour that will take you to the Glacier Lagoon & Diamond Beach.